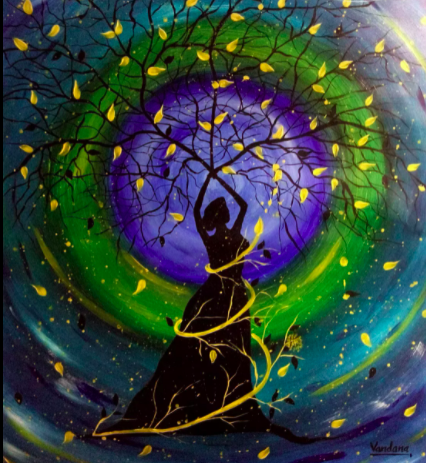 According to Wikipedia Ecofeminism is “a branch of feminism that sees environmentalism, and the relationship between women and the earth, as fundamental to its analysis and practice. Ecofeminist thinkers draw on the concept of gender to analyse the relationships between humans and the natural world.”

Ecofeminism has always been part of our human existence, emphasising a strong connection between women and Mother Earth. If we look at the importance of women in tribal cultures, their knowledge of herbs, used in cooking, healing and art, can clearly set a pattern of Gaia’s giving and female energy understanding and acceptance her gifts.

Women have always had a deep connection to nature, which have often been linked with the expansion of powerful gut feelings women get, giving them almost psychics-like powers. However, this powerful relationship hasn’t always been appreciated by the exploitive nature the patriarchal culture has been enforcing onto nature, the environment, women, and anyone not fitting the established patriarchal image.

The fear of empowering women (women are powerful and, if collectively we support one another, we could be unstoppable) was one of the triggers of the Catholic Church’s (patriarchal society at its “best”) prosecution of “witches”. The witch-hunting chapter of our shared history was enforced to keep women in fear, uneducated, disconnected from the power of nature and dependent on men (husbands or fathers) without rights, opportunities, and possibilities to decide about their lives and futures.

History loves repeating itself, and if it is forgotten, it’s even easier for the past to catch up with the present. From the current political trend swiping through many developed nations, one can easily see that those pushing nationalistic agendas try to turn back time. For many individuals, even in the younger generations, that sounds like a very promising perspective. For women, turning back time would ultimately mean going back to a wretched place, a place without rights and opportunities, filled with crushed dreams and possibilities. Only because someone was born a man shouldn’t mean they know better, or their perception of reality should be a status quo and accepted as the rightful truth.

As women, we must protect our rights and not give our powers away for “false” security promises. On the surface “secure” life could be easier. But in reality, would require too many sacrifices, including scaling down on our powers, rights, opportunities and possibilities.

Throughout history, women have been portrayed as the weaker “elements” that can be pushed aside, intimidated, and have their rights, jobs, and lives taken away if we speak up. To be fair, it still happens on daily basis, especially online, but at least now we can fight back all these awful trends: discrimination, misogyny, sexism, ageism, etc.

With the rise of right-wing politics and climate-change-denying rhetoric across the world, now more than ever, we need to fiercely protect our rights and freedoms, which by natural order are strongly connected to Mother Earth.

The disregard of Mother Earth displayed by political and corporate powers (Who runs those organisations? Who is in control?) is reflected in the treatment of women: still, ongoing lack of opportunities, rising childcare costs, lack of support, gender inequality when it comes to pay and education, violence against women, belief that women are inferior, sexualisation of young girls, mainstream media narrative that women only should look good and spend money left and right, instead of building a nest egg etc. As you see, I could go on and on.

We should be cherished for our ability to draw powers from our relationship with Mother Earth, instead of accepting and submitting to the outdated image of women and womanhood.

The patriarchal media image of “an ideal woman” has distorted our image in our own eyes, and people, who feel threatened by female empowerment want to continue pushing that harmful concept.

Preserving the planet in a sustainable way for future generations is what we all should be focusing our energies on; not on how women look, what they eat and whether they are nice, hot or “difficult”.

If we are to save this planet, women can’t be side-tracked and excluded from the decision-making process. It’s time to take our powers back and focus our energy on rebuilding the planet and lives based on a genuine, and loving relationship between humans and Mother Earth allowing women to thrive in the process.